Rodents are the largest group of mammals with over 2700 species, although only 14 are present in the UK.

Most rodents avoid living in close proximity to people, the few that do are called "commensal" rodents. Rodents are a common pest in both rural and urban areas, and certain types of rodents - the Black Rat, the Brown Rat and the House Mouse - can cause and spread disease, as well as eating/spoiling food for human consumption; so resolving the problem and preventing future ones is important and requires input from an experienced Pest Controller

South Staffordshire Environmental offer discreet rodent control services to domestic, commercial and retail clients throughout South Staffordshire and West Midlands area. We use high quality products to enable us to provide you with a safe and humane solution.

The first obvious signs that may indicate that you have a rat or mouse infestation are:

Rodents can access premises in a number of ways. They can squeeze through gaps as small as the width of a biro, so gaining access via waste pipes, damaged air vents or from underneath roof and fascia tiles is fairly easy for them!

Once rodents have gained access they can gnaw through, and at, wooden areas, cables and a wide variety of other items they encounter. Rodents will eat and spoil foods they can access easily, leading to waste and the potential for disease. It's not uncommon for them to nest in loft/cavity insulation and other areas they find comfortable.

The Norway Rat was first introduced to the UK in the 18th century in shipping from Russia or Norway, however it originated from North China and South Eastern Siberia.

It's most commonly this rat that you might find living somewhere in your premises, burrowing on your land and living in sewers. The Norway Rat lives in colonies and has a structured social system.

The Black Rat originated from Southeast Asia, and is thought to have been introduced into the UK in the 3rd or 4th century, but it's likely that it arrived even earlier than this.

Once the dominant rat of this country, it's now mainly limited to ports or towns that are linked to ports by canals, but they are not found in sewers.

Black Rats will happily live both on and off the ground and can be found in trees, houses and high up in cavities which provide shelter.

It's mainly found in houses but can be found in a wide variety of buildings in both rural and urban areas; it lives very little outdoors.

Grey Squirrels are also classed as rodents, as they have the characteristic incisors that grow throughout their lives, they also have no canine teeth.

These squirrels build dreys (nests) from leaves and twigs in the forks of trees, they also use hollows in trees, called dens. Attic spaces are a favourite for grey squirrels and they can enter most attics quite easily, climbing across fences and tree branches to access these areas. Once a squirrel has gained access, the damage caused can be severe: they will gnaw woodwork, rip up and make nests within loft/cavity insulation and strip the insulation from cables.

The first signs that indicate that you have a squirrel infestation:

Grey Squirrels' diet mainly consists of nuts, shoots, fungi, fruit buds and birds eggs; and they will happily feed from bird tables, or eat food that is put out for them. Surplus food is buried for retreival later.

There are 2 breeding seasons per year, with the first litter in February - March and the second litter between June and July.

The young are born blind, deaf and naked, weighing between 13-17 grams.

Young are sometimes capable of breeding at 6 months and usually by at least 12 months, they will live for around 6 years.

Once adult, a Grey Squirrel is around 250mm in length with a tail of 220mm, and both male and female weigh approximately 500grams. 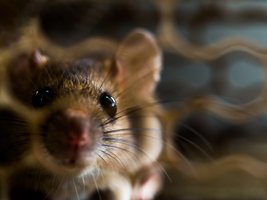